You are here: Home / Capture / Look Who Got Caught: Buddy

We received a capture request asking for help with a gorgeous dog that was living at a park in SE Dallas. The Good Samaritan named him Buddy and he was sweet and friendly with the people and dogs at the park but elusive. We went out last weekend and set up a trap but Buddy wanted nothing to do with it so we started the conditioning process. We trained the Good Samaritan to feed Buddy outside the trap (locked open) and he slowly moved the food back further and further until Buddy was all the way in. Buddy was a quick learner and it took less than a week for him to realize that the good food was in the back of the trap. Once we saw on camera that he was going all the way in the trap, we set a capture date! The day before we captured Buddy we met with Rey, the Good Samaritan, and showed him how to set the trap. Buddy and Rey had become friends and he trusted Rey but he did not trust anyone else so Rey would be the one to trap Buddy with us standing about 200 feet away. When we arrived at the park, Buddy was waiting and within 5 minutes of our arrival, Buddy was in the trap! All of the prep work and conditioning paid off! #SUCCESS 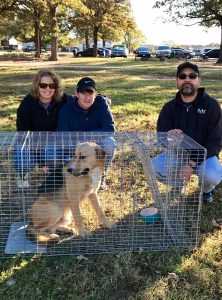