You are here: Home / Capture / Look Who Got Caught: GSD West Dallas

Several weeks ago we were contacted by a Good Samaritan and asked to help a sweet GSD in west Dallas. The Good Samaritan had been feeding her for weeks but she could not catch her so one of our capture team volunteers went out and set a trap. This smart girl was not quite ready to walk into the trap but after several days of conditioning, she was caught quickly the second time around. Once captured, we scanned her for a microchip and she was chipped! We later found out that she was adopted from a local shelter and when we contacted the owner, he told us that she got away from him several months ago but he did not want her back. No worries!! Her Good Samaritan and angel named Angela could not stand the thought of this sweet girl ever being alone again so she has decided to keep her and we’re so happy for both of them! 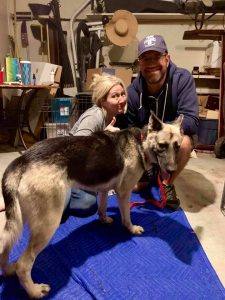